What is Crop Mob?

Crop mob is primarily a group of young, landless, and wannabe farmers who come together to build and empower communities by working side by side. Crop mob is also a group of experienced farmers and gardeners willing to share their knowledge with their peers and the next generation of agrarians. The membership is dynamic, changing and growing with each new mob event.

Crop mob began in the Triangle region of North Carolina in October of 2008. A group of 19 farmers, farm apprentices and members of the larger agricultural community came together at Piedmont Biofarm in Pittsboro, NC to harvest sweet potatoes. In what has become a tradition, the crop mob returns to Piedmont Biofarm every October for the sweet potato harvest. Each year the number of participants grows as does the volume of the harvest. Since that first mob in 2008, more than 50 crop mob groups have started up around the United States, each with its own unique constituency and additions to the model. Much of the rapid growth is attributed to a single New York Times article. 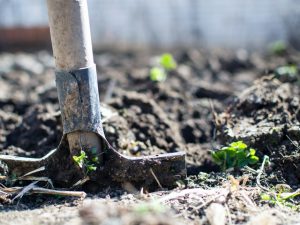 In the past farming was much more labor intensive. Activities like planting, harvesting, processing, and barnraising often required the collective effort of entire communities. This interdependence fostered strong connections within those communities. As farming became more mechanized and reliant on petroleum based inputs, it became a more independent and solitary career. Today, in the industrial farming system, a few people may manage hundreds or even thousands of acres.

While nationwide the number of farms and farmers has dwindled, right now in the Triangle area of North Carolina there is a surge of new sustainable small farms. These farms are growing diversified crops on small acreage, using only low levels of mechanization, and without the use of chemical pesticides or fertilizers. This is a much more labor intensive way of farming that brings back the need for community participation.

Many crop mobbers are apprentices or interns on these sustainable farms. The need for community participation matches a desire for community among young people interested in getting into farming. The crop mob was conceived as a way of building the community necessary to practice this kind of agriculture and to put the power to muster this group in the hands of our future food producers

We work together in the spirit of mutual aid and any crop mobber can call a crop mob to do the kind of work it takes a community to do. We work together, share a meal, play, talk, and make music. No money is exchanged. This is the stuff that communities are made of.